Fab still not a fan of two-leg finals

Newcastle player-coach Fab Flournoy says he still prefers one off finals, despite the Eagles’ success over two legs against Plymouth in the BBL Trophy Final. 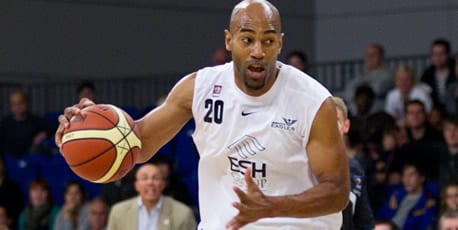 Newcastle player-coach Fab Flournoy says he still prefers one off finals, despite the Eagles’ success over two legs against Plymouth in the BBL Trophy Final.

The Eagles picked up their second piece of silverware of the season last weekend, recovering from a nine point first leg deficit to inflict a second final defeat on the Raiders this season following January’s BBL Cup success.

After a trophyless campaign last year, the Eagles are now well on course for a domestic treble, with the end of season play-offs still to come.

Flournoy said: “I still prefer a one off final. By all means play the playoffs as best of 3 or over two legs but for me finals games are exactly that, finals. It should be one and done and if we are on the wrong end of that so be it.

“That said I do understand the commercial reasons for it and I suppose after the success of the event we had on Friday night there is argument to continue with the format.”

Newcastle lost the first leg on the south coast, but were cheered home by their own fans in a packed arena on Sunday.

Captain Andrew Bridge, who picked up his 15th winners medal with the club in the match, said: “I don’t think I’ll ever like two-leg basketball, but it was nice to win it at home. The atmosphere was amazing, and outside big games in Greece etc, you’d struggle to find a better atmosphere in European basketball.”

Newcastle continue their march to the BBL Championship title against MK Lions on Friday.