Veteran guard EJ Harrison has become the latest player to re-sign for Glasgow for next season. 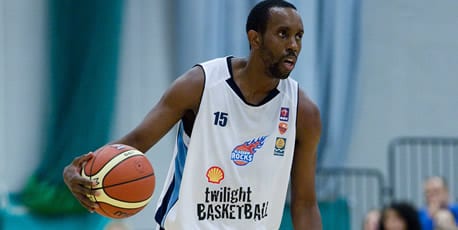 Veteran guard EJ Harrison has become the latest player to re-sign for Glasgow for next season.

Harrison, 36, will return to Scotland for a third consecutive season, looking to bounce back from a difficult 2011/12 season which saw him suffer a serious ankle injury, and miss a portion of the season due to a family bereavement.

He follows on from the re-signings of Gareth Murray and Andrew Wedemire.

Harrison said: “I’m very happy to be back with the Glasgow Rocks for a third season. My objective this year is to bring silverware back to Glasgow.”

Player/coach Sterling Davis said: “I really wanted to focus on bringing back the majority of players from last season so that we could build on what we achieved late in the season. EJ was always my first choice to fill the point guard position and I am very happy that we were able to sign him for a third time.

“He had a tough 2011/12 campaign but showed great determination and strength of mind to finish off the season the way he did. His leadership, experience and work ethic are second to none and I am looking forward to playing with him again.”

The Rocks announced news of Harrison’s stay alongside confirmation that Canadian/British forward Andrew Wedemire will also remain in Glasgow for next season, which begins in September.