Eagles coach: BBL Trophy success was ‘much more than a basketball game’

Newcastle Eagles coach Fab Flourney has revealed that the BBL Trophy final success over Plymouth Raiders was ‘much more than a basketball game’. 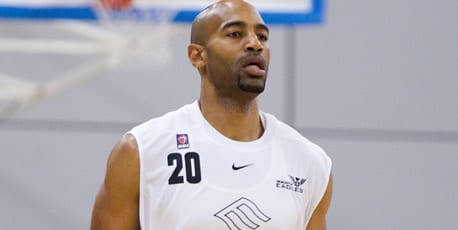 Newcastle Eagles coach Fab Flournoy has revealed that the BBL Trophy final success over Plymouth Raiders was ‘much more than a basketball game’.

Newcastle overturned a first-leg deficit to defeat Plymouth 97-88 on the night and 184-177 on aggregate, securing their fifth BBL Trophy victory in the process.

Flournoy was of course delighted with his team afterwards, but was also full of praise for Plymouth who did all they could to seek revenge for the BBL Cup defeat to Newcastle back in January.

Speaking to bblfans.com, the Eagles coach said: “I’m just really ecstatic. Despite the circumstances of the deficit from the first-leg, we came back together. To do it on our home court for the fans was just fantastic.”

“The players really worked hard and the coaches have put a lot into it. It’s just great and something we will remember for a long time. Overall, it was a great team performance. “

“I have to give credit to Plymouth. They came up and executed their game plan. The Raiders were really well prepared and I would arguably say that it was much more than a basketball game or a trophy.”

“It was a little residual from the other final. I have to give them a lot of credit as well. Unfortunately someone had to lose.”

“Everyone wants to win a trophy and everyone felt that they had a right to win. To be honest, they had as much right as we had.”

Flournoy was then full of praise for the atmosphere during the second-leg, saying that both sets of fans played their part in making the final as exciting as possible.

He continued: “Both sets of fans really got behind their team and in the sport of basketball, that was great for the teams and great for the league. You had that bit of atmosphere that you relish.”

“It was testy, but respectful. It didn’t get out of hand. We weren’t talking about violence which you get in other sports. It just all added to the atmosphere, which was intense.”

As for the celebrations that followed the victory, Flournoy said: “I haven’t celebrated too much after the win. The atmosphere we had within our team and all celebrating on the court, it was just fantastic.”

Next up for Newcastle is a home game in the BBL against the MK Lions on Friday.

Leopards close in on EBL title – Round-up
MK Lions skipper: We still have everything to play for