Leicester Riders forward Drew Sullivan stated yesterday that he is fully focused on leading his team to glory in the BBL Cup final. 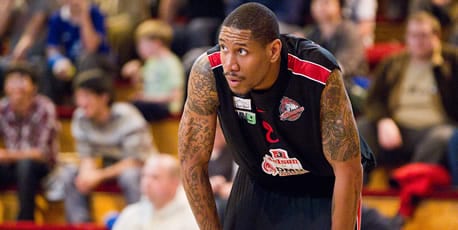 Leicester Riders forward Drew Sullivan stated yesterday that he is fully focused on leading his team to glory in the BBL Cup final.

The Great Britain Captain remains fully confident ahead of their semi final clash against their unbeaten rivals Newcastle Eagles on 26th November.

He said: ‘we feel confident in the way we are playing and our goal is to get to the final.  I imagine it will be a good couple of games.’

Sullivan and the Riders have seen an impressive run of form to get them to this stage. They beat the Cheshire Jets 95-74 in the quarterfinal and are unbeaten in the league.

Drew thinks that his teams performance can only improve from here and praised the recruiting work done by Coach Rob Paternostro:

‘Rob has done a great job recruiting players this year. There is  good talent in our team this year. ‘ He said.

Sullivan continued: ‘we have the cup to look forward to and we will try and win the league but that comes with playing well consistently. ‘

Since signing for Leicester on a week-by-week contract, the 31 year-old has been performing to the best of his ability averaging between 19 and 23 points per game.

Mersey Tigers head coach Tony Garbeletto hailed him as the best player in the entire league. Drew replied to these comments with the greatest respect for his former boss:

‘It’s funny because I think Tony is the best coach in the BBL. For someone like him, who I have so much respect for to make a comment like that, it means a lot.It’s not something I think about because I have always just tried to go out there and perform to the best of my ability. I am not going to let it get on top of me and feel under pressure but those were very kind words from Tony. ‘ He said.

If the Riders advance to the final in Birmingham on January 15th, they will face either Worcester Wolves or Plymouth Raiders. The Worcester Wolves have achieved their best ever start to a season winning 8 games in a row. As for the Raiders, they fought long and hard to achieve their semi final berth and both teams have deserved their place.

Sullivan said that he is impressed with the form of both sides. He stated: ‘When you have got teams like Worcester and Plymouth who have used good money to build a strong team, its only good for the BBL. I think if Worcester and Plymouth are challenging for silverware it makes it a lot more fun for the fans.  Then maybe people will think the BBL is a better league than what its given credit for. ‘

Many fans will be looking forward to the showpiece semi final between Leicester and Newcastle in a battle of the unbeaten. The question is, whose record will fall and who will proceed to the final in the New Year?