Mersey Tigers captain David Aliu will be penning a regular column for BBL Fans, giving us the insight in to what it’s like to be a professional basketball player in the UK. 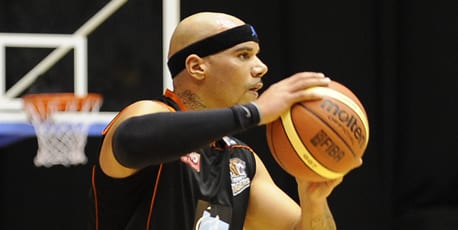 Mersey Tigers captain David Aliu will be penning a regular column for BBL Fans, giving us the insight in to what it’s like to be a professional basketball player in the UK.

In his first column, he talks about the wholesale changes at the Liverpool club, who he thinks will be up there at the business end of the season and what he’s doing off the court.

“Things at the Tigers are good, considering. It’s been tough with no pre-season so we are still getting in to shape and getting used to playing with each other. But we are making huge improvements as a team each and every day, and that’s been reflected by the progress we have made in our games. We have a good bunch of guys who work hard and play together and that is all you can ask for.

But despite everything that’s gone on, we’re still aiming to win whatever trophies we can this season. We are unfortunately out of the BBL Trophy following Friday’s defeat against Sheffield, but there is still the cup, the league and the play-offs to play for, and are aims are to challenge for those titles. We have to aim high and strive to achieve our targets as this is what pushes us each day to improve.

Obviously I’m the only player left from the team that won the treble last season, with Nate Reinking going to Sheffield, James Jones to Plymouth and Andrew Thomson to Newcastle. It was will be strange going against them as we achieve so much together last season in the face of adversity, but that’s basketball. Teams change every year and I’ve been around enough to have got used to playing with different players each year.

Newcastle will be up there as they are a top team every year, and Sheffield are well balanced with winners on the team. I think Plymouth are going to be tough and Leicester have stepped up a level now with the addition of Drew Sullivan, as he’s a winner, and that can only be a good thing for them. So the four players from last season we’ll be coming up against are going to be in with a chance for a trophy. But I’m looking forward to a long, competitive season and hoping that we can compete in each and every game.

Off the court, I’m busy running my company Fitter Genes, which is aimed at reducing obesity in children. We are busy going around primary schools in the area delivering sessions. It takes up a lot of my time outside of basketball but the rewards we see make it very worth while.

To find out more about Fitter Genes, visit www.fittergenes.co.uk or check us out on Facebook.