Consistency the key for Sing

Colin Sing is enjoying his time at the Sheffield Sharks and hopes to be involved in the season-ending play-offs for the first time. 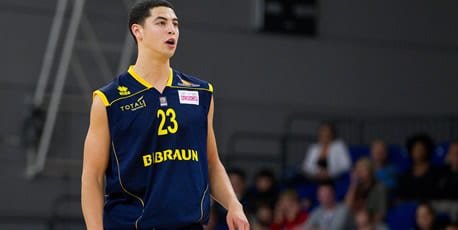 Colin Sing is enjoying his time at the Sheffield Sharks and hopes to be involved in the season-ending play-offs for the first time.

The Liverpool born guard, who celebrated his 23rd birthday last week, is enjoying the competitive challenge and aims to continue improving by being more consistent for the remainder of the season. Sing joined the Sharks in the summer along with Zach Gachette, following a two-year stint with the Essex Pirates.

The move has been very beneficial with the opportunity of playing alongside experienced professionals.

He said: “My game has improved considerably as being with these players has made me realise that sometimes less is more. Atiba (Lyons) has also taken the time to give me some things I need to work on.”

As well as playing for the Sharks, Sing is also studying for a Sports Coaching degree at Sheffield Hallam University, and he has to take more time organising his weeks to fit in the studying.

Sing is averaging almost 20 minutes a game, a stat which has increased of late due to players being missing for the Sharks with Nate Reinking still on the sidelines. He was also involved in the recent BBL Trophy semi-final defeat against the Newcastle Eagles and was impressed by the BBL Cup holders.

“They have lots of options and have had the same solid unit for a number of years now which gives them an edge over the other teams in the league.

“Our target is to put together a winning streak as we will be playing teams below us in the league and then make the play-offs”.

Sing has an excellent work ethic and joins a growing list of young British players in the league hoping to be recognised by the national team.