Leicester Riders finished off their BBL trophy schedule with a comprehensive 58-96 victory over EBL side London Leopards on Friday night. 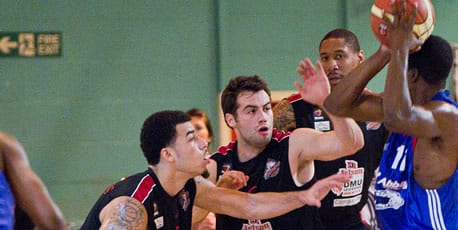 Leicester Riders finished off their BBL trophy schedule with a comprehensive 58-96 victory over EBL side London Leopards on Friday night.

The Leopards Vernon Teel led all scorers with 21 points personal whilst GB Captain Drew Sullivan netted 18 for his respective Riders.

The game also seen the return of shooting guard John Griffin who made an impressive comeback from injury as he marked 13 points on the score sheet.

The Londoners kept the game close in the early exchanges with the Riders only leading by 2 in the opening minutes at 10-12. That soon changed as a massive 20-5 burst from the visitors gave them a healthy advantage leading by 15-32 at the end of the first period.

The Riders continued to build on this advantage as they were well ahead at the break with the score at 29-52.

Jamall Anderson stretched they lead to 42 points in this relentless onslaught in the second half at 33-75. The hosts hit back with a 7-3 run right at the end to go into the final stanza trailing 40-78.

Rob Paternostro’s side were comfortably in front so Coach Paternostro decided to give his bench a run out to see out a successful night.

Paternostro said: “It was a good training session for us looking ahead to Sunday. The Leopards had a couple of injuries but are well coached and do a good job. At times our ball movement was good and it stands us in good stead for Sunday.”

Eagles through to semi-finals after thriller
Worcester stun Tigers