Coach Elderkin looks for the positives 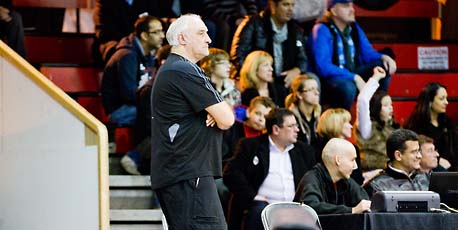 Durham Wildcats head coach Dave Elderkin was in thoughtful mood with one more game to go before his team gets a well deserved Christmas break. So far the Wildcats have managed a single win in the BBL Championship and hold 1 – 8 record, sitting just above the Guildford Heat in the table. With the break just a week away, how does coach Elderkin see the first half of the season in the BBL

‘We still have that one game to go at home next weekend, see how we play in that. I have some big decision to make of the player personnel and such. I really don’t like losing, we’ve only got that one win so far this season – but when I look at our results, I think that in 6 or 7 of our games we’ve lost them by five points or less, so I will that as a positive from our performances.’

Last weekend saw Wildcats losing first in Milton Keynes to the Lions and then in Leicester to Riders. The game against Lions started very well for the Durham team, before Demarius Bolds took it upon himself to get the Lions back into the game, Saturday the Riders were desperate to bounce back from two defeats – so a win against them was always going to be a tough one to achieve.

‘Bit disappointed with the result against the Riders, but the team was really tired after Friday’s game against the Lions. This was also our third consecutive weekend with a double-header, so we are really finding how hard it can be in the BBL’

Hard double-headers, traveling and new challenges – that is a lot to digest for the BBL newcomers, is there any regrets about joining the league for this season?

‘None, it was absolutely the right decision to make to step up and join the BBL, and I am really enjoying everything about it.’

In their last few games the Wildcats have started the game well, and a good example of this was their game against the MK Lions. Where Durham took an early double digit lead in the opening quarter – why is the team not able to hold on to the lead and win the games, is it all down to just having to be a little more consistent through the game? Teams with BBL experience also seem to be doing quite well in the league, something that the Wildcats are lacking in their first year in BBL.

‘Decision making! We don’t have much BBL experience in the team, and before we joined in I had people coming to me and telling that there is a ‘BBL-way’ of playing the game, and I had no idea what they meant, but I’ve learnt quickly to know about it. We have gone up in early in many of our games, and then had a long time having to defend the lead. In some of those games we just haven’t made the right decisions during the game.’

Season is long, and with it comes improved performances and coach Elderkin looks positively forward and to the challenges ahead.

‘If we keep improving our game, with it comes improved performances and also that will help us win games.’

As a minority sport basketball has to battle for fans with the bigger sports, how has Durham welcomed the Wildcats move to the BBL. During the early season game against Plymouth Raiders the crowd included a local rugby (?) team, who livened up the atmosphere with their constant singing and chanting, how has it been otherwise.

‘The crowds have been good, in the last few games they have clashed a bit with some big events in the County, but in general the numbers at our home games have been good. We do have a strategy in place, for long term, everything we do is about building in the community and as long as you got that support in the community you have a fan base to support you and that is absolutely our priority.’

One more game to go before Wildcats take a break for Christmas, and the visitors to Durham are the Sheffield Sharks.

‘Sheffield, again, are another big team. We need to work out something different defensively to our last meeting, we need to find a way to stop their big three of Tuck, Dobbins and Babalola from working under our board. Last time we got a little frustrated with that, then sent some help to deal with the threat and that in turn released Reinking and Langhurst to score from the long range – so the Sharks are not an easy team for to play.’

After the break, Durham will face Guildford Heat in the bottom of the table clash on the first day of the New Year – it will be an interesting game to see which team has recovered quicker from the festive break. Having seen both teams play couple of times this season, it will be a tight affair at Surrey Sports Park with both teams desperate to win the game. Wildcats have improved their performance by a mile from the first time I saw them this season at their away game to Newcastle in the BBL Trophy – the team that took on court that day and the one that started against the Lions on Friday, it really shower the progress that has been taking place in Durham over the last months. If, as coach Elderkin says, the team can keep improving for the next few months – there will be few more wins for the BBL newcomers before the season is over.