Cheshire Jets claimed back to back victories following their win over Sheffield with a 80-75 victory over Guildford Heat to go two points ahead of playoff rivals MK Lions. 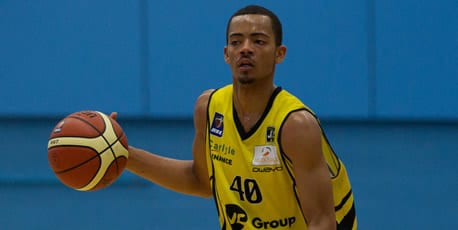 Cheshire Jets claimed back to back victories following their win over Sheffield with a 80-75 victory over Guildford Heat to go two points ahead of playoff rivals MK Lions.

Delighted coach John Lavery said: “it’s another win. It’s another foot into the playoffs but we are not getting carried away, we have got five big games left to play. Team spirits are high and that has definitely showed on court so hopefully we can push on from these two wins.”

Adam Brown had the hot hand on the night netting 30 points and played his part in the best of a 15-0 streak that effectively won the game heading into the final quarter. Matt Schneck had an impressive double double performance recording 17 points and 19 rebounds. Tayo Ogedengbe top scored for the visitors with 20 points.

Ogedengbe opened the scoring dunking with authority as the teams went blow for blow in the opening stages. Two consecutive scores from Brown as he went coast to coast and layed the ball up to give the Jets a 9-4 advantage. Drew Lasker made the game all square at 14 with his effort and the Heat took control after Martelle McLemore sunk a three. The Heat maintained the lead to finish the period 23-18 after another McLemore bucket.

In the second quarter, the Jets upped their intensity as Bill Cole and Kai Williams hit back to back triples to bring the hosts within five at 24-29. Ogedengbe and Mike Martin kept dropping shots to ensure the heat would keep their noses in front. The Jets upped their intensity and Williams hit his second triple of the night to bring the Jets closer to the deficit. Brown hit a tough shot as he was fouled to finish the half with the Jets trailing by three at 39-36.

Martin scored 8 of his 15 points in total in the next period to extend the Heats advantage. But the momentum soon changed. Brown sparked a 15-0 Jets run and nailed a nice fade away jumper to take the lead at 59-58. He then added a pair of freethrows to finish the period 61-58 to the good.

Guildford made their free-throws count in the final stanza as Ogedengbe tied the game at 63 from the stripe. Cheshire responded with another 6-0 run again led by the precision scoring of Brown to stay ahead. Consecutive scores from Holmes brought the deficit back to three as he dominated under the basket. The game was sealed as the Jets punished the Heat on the fast break and sealed the success with Schneck adding to the final score from the line.