Chapman makes it four in a row in BBL selection

For the first time this season, a player manages to secure a stunning four successive appearances in our line-up. 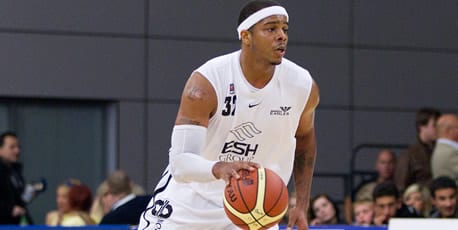 For the first time this season, a player manages to secure a stunning four successive appearances in our line-up.

We’re running out of superlatives for shooting ace Joe Chapman who books his spot in our starting five for the fourth week in a row. It means he is back to being just one behind Ayron Hardy again who still has the most appearances of any BBL player this season. The guard was sensational against One Health Sharks Sheffield in the first half of the BBL Trophy semi-final second leg when he shot the lights out with a majestic three-point master-class. While his numbers dipped a little after the re-start, it was still enough to seal the deal. He racked up 31 points including seven triples from 11 attempts and he was four of five from inside in what was a super offensive showing.

It’s the second time Adam Brown has made the BBL Team Of The Week in what has been a tough season for the Jets. However, he helped his team-mates secure a fine home success over Prestige Homes MK Lions with an impressive double-double display. He poured in 31 points and also pulled down ten rebounds to help ensure a valuable victory which keeps his team in the thick of the play-off race. Brown also recorded three assists and two steals in an all-action and typically energetic effort.

While Chapman grabs the headlines for his quartet of appearances in recent weeks, Tommy Freeman posted a quite wonderful performance over the weekend in what was one of the very best in the BBL this season – as evidenced by a stellar performance valuation of 41. He was brilliant from downtown as he converted seven three-pointers from only nine attempts. In addition to putting UCP Marjon Plymouth Raiders to the sword with a devastating 40 point haul in this title shoot-out, he also came up with five assists, three rebounds and made every one of his eleven foul shots count.

Overshadowed a little in recent months by the rich vein of form found by his Eagles’ team-mates and particularly Joe Chapman, Charles Smith and Paul Gause, Andy Thomson has just got on with business as normal and reminded us all of his class last Friday. He came up with a signature performance full of intelligence, hard work and efficient shooting to help the Eagles ease their way past One Health Sharks Sheffield and into the BBL Trophy Final. Thomson finished with 19 points from seven of ten floor shooting and that haul included three triples. He also did the dirty work on the glass with eight rebounds

It’s successive appearances for the Raiders’ big man who helped his team get back on track with a Sunday success over One Health Sharks Sheffield having been beaten on the road at title rivals Worcester 24 hours earlier. It was yet another monumental double-double for Williams whose line read 25 points and 18 rebounds when the final buzzer sounded at the Pavilions. Most impressively of all was the finishing around the hoop with the center managing to sink 12 of his 15 field goal attempts.

Job done for Eagles
Freeman – I was in the zone