The efforts of Leicester Riders BBL-rookie Brett Royster were well noticed by Mersey Tigers Marlin Capers as the two teams met on Saturday evening at JSSC in Leicester. 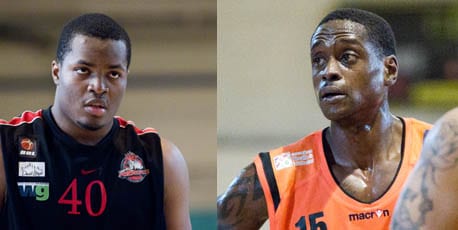 The efforts of Leicester Riders BBL-rookie Brett Royster were well noticed by Mersey Tigers Marlin Capers as the two teams met on Saturday evening at JSSC in Leicester.

22 year old Royster moved to Riders after completing four years with FAU in NCAA 1 – where he shattered the University records in blocked shots during the fours years, including Blocks per Game, Blocks per season, Best Blocks per season for Freshman and list goes on…

Capers has been around the BBL for few years and commented after the game, about his first meeting with the 6’8″ forward.

‘I think many teams will be surprised by him (Royster), he is a big strong guy under the basket and doesn’t get moved easily. I tried to get push him under the basket – but he was having none of it – and just looked at me.’

In the BBL Royster has played in eight games for the Riders, and is still adjusting to the game on this side of the Pond – which showed in the game against Sheffield Sharks where he fouled out having spent only ten minutes on the court. But he is already making his mark under the defensive basket, blocking shots and grabbing rebounds.

Despite the hard and competitive action on the court, there was still time for a bit of friendly banter as Capers spoke to Royster during the game.

‘I told him that I’ve been in this league for a while and am a veteran – so as rookie he could show me a bit of respect.’ Capers added with a big smile on his face.

Next weekend Royster and Riders will face the Newcastle Eagles in the BBL Cup semi-final first leg, which will be another test for the Riders big guy as he faces couple of more BBL veterans.