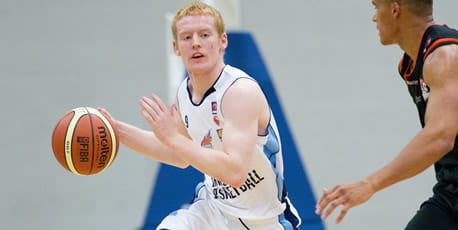 Glasgow Rocks rookie and local boy Jonny Bunyan is relishing the opportunity of unexpected BBL minutes after stepping up in the absence of injured EJ Harrison.

Nineteen year-old point guard Bunyan has been a key player for the Rocks in keeping them in the top half of the table after losing star point guard Harrison to a severe ankle sprain at the start of November.

Harrison’s injury has required a shift around in the back-court, with Mychal Green moving to point guard and Danny Huffor starting at shooting guard.  This has meant 5’10” Bunyan is filling in crucial relief minutes, something that hasn’t fazed the Falkirk-born player at all.

“The BBL is pretty much what I expected.  I played in a prep school in America last year and I’ve played with Falkirk Fury – who are quite a good team in the Scottish league – my whole life so I was ready for the challenge, but I certainly adapted to it quicker than I thought I would.”

Bunyan’s last outing, a twenty minute stretch against One Health Sharks Sheffield where he matched up directly against GB international and BBL legend Nate Reinking, saw him rack up all of his 9 points in a key 9-2 burst at the start of the fourth period that allowed the Rocks to pull away in the game, as well as notching 4 assists.

“I’m really happy with what I’m doing for the team right now.  I’m honoured to come through and train with the American guys – it really improves me as a player and anything I can do in the games is just a bonus.”

Rocks’ player/coach Sterling Davis was also full of praise for Bunyan, adding, “He’s really doing a good job for us – [against the Raiders before Christmas] he was the only one who really did anything for us all weekend.

“He’s always had the potential to be a really good player, it’s just about getting him out there and getting him a feel for playing out there.

“As you see, he’s dependable, he knows how to play the game and he’s playing with more confidence now.  He’s realized he can shoot the ball and be an offensive force instead of just passing the basketball.  I think as time goes on he’ll get even better.”