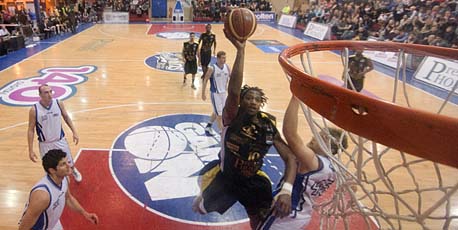 MK Lions kicked off their weekend with a home win over the Durham Wildcats, but it took a while for the Lions to get into the game. Wildcats started the game strong, and Mike Capocci helped the visitors take a quick 14 point lead inside the opening 10 minutes, and he was well assisted by Ralph Bucci. Home teams coach Mike New called couple of time-outs to try and get his troops going, and has to give a big thanks to Demarius Bolds for keeping his team with-in 11 points after the first ten.

‘We started out the game kinda slow, but we managed to play our way out of the situation’ commented evening MVP Demarius Bolds at the Lions start to the game.

Second spell was almost a total reversal of the first ten, Lions started to slowly eat into the Wildcats’ lead, and with little over a minute to go in the quarter, Lions took the lead for the first time in the game. This time it was Durham coach Dave Elderkin who kept calling for time, as he watched his team throw away a 14 point lead. Both teams were shooting terrific percentage from the bonus-line, with Lions making 12 out of 13 only miss ironically coming from Bolds. And visitors shot 5 out 5 from the line, as the Lions walked to the locker rooms holding a four point lead.

Half-time talks in the locker-rooms brought two fired-up teams to the court, Daniel Northern and Howard Crawford worked hard under the baskets, with Northern reaching a double-double with 14 points and 15 rebounds (or a triple-double as there was the added bonus of 10 turn-overs). Mario Flaherty hit couple two pointers to help the visitors pull the game to a four point game, and when Nuno Pedroso gave away an un-sportsmanlike foul the Wildcats had a chance to level the game. Two out Two from the line brought the game to two points, but Lions defended well to prevent Durham from tying the game.

Momentum in the game seemed to maybe be shifting as the teams battled the last seconds of the third quarter, and it seemed we were heading to the last ten with the gap at three points – but Bolds had other ideas. With less than a second on the clock and Bolds holding the ball deep in Lions zone, he slung the ball towards the basket and it went in from the back-board. Leaving the Lions fans jumping and even Wildcats coach Elderkin was forced to smile at the shot.

‘It was kind of a lucky shot, I just threw it up and it looked like it was going in – so I just stood there and watched it go in the board’ Bolds commented on his big three at the one third quarter. Durham’s game made an impression on Bolds, as he talked about the BBL new comers.

The last ten started with both teams exchanging points – before the home team extended the lead to 17 points at best, and giving them chance to rotate the bench and give time to almost everyone on the roster. With the clock running down the seconds, the Lions stood in the end to celebrate a 87-74 win over the Wildcats.

‘I haven’t seen them play much, but I do really like the way they play the game. You look at them and ways you can advantage over them, but the run around a lot. You look at their defence and they way the keep moving, and they will make you move as well, ain’t nobody wanting to play defence for 24 seconds trying to run around chasing people, so I think really did a good job at it and made us work really hard for the win’

Lions now get a day-off before traveling to visit Cheshire Jets on Sunday, Durham stay in the Midlands as they face Leicester Riders at the John Sandford Centre on Saturday evening.