Being a BBL newbie all over again

Last Friday I made my first ever visit to Sport Central, the (relatively) new home of the Newcastle Eagles, watching the home side against Sheffield Sharks in the BBL Trophy. 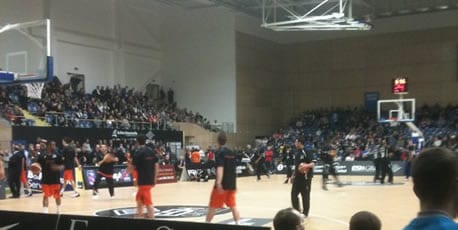 Last Friday I made my first ever visit to Sport Central, the (relatively) new home of the Newcastle Eagles, watching the home side against Sheffield Sharks in the BBL Trophy.

For me it was my first BBL game for around seven years – in the days when the Eagles and “my team” Newcastle Vipers ice hockey played at the Newcastle Arena.

As a younger (and thinner!) lad I was a supporter of the Gateshead basketball club, playing in the National Basketball League out of the Gateshead Leisure Centre. A National Trophy triumph at home against Brixton Topcats (who had both Baker boys playing for them) was the highlight of a first season. Two subsequent campaigns saw the side struggle in NBL and finally cease playing operations completely.

I took in some BBL games with at first Sunderland 76ers playing out of Northumbria Centre Washington, before current Durham Wildcats supremo Dave Elderkin moved the side to the new Newcastle Arena on the banks of the Tyne and renamed them Newcastle Comets.

At the same time, I began a (so far) 16 year love affair with ice hockey and basketball took a back seat.

While the various Newcastle teams were plying their trade at the Arena, I took in a few Eagles games and on the whole I did enjoy – but the basketball was certainly my second sport.

When the Newcastle Eagles made their move to Northumbria University’s state of the art Sport Central complex, I promised myself that I’d go to a game – I am an alumni of Northumbria after all!

Well it took a while but I made good on the promise last week.

First of all, the venue. Wow – an amazing transformation of the whole campus, with Sport Central at the very heart.

I made my way in, everything was very well signposted, with plenty of stewards ready to point you in the right direction.

The main hall is a fantastic place to watch basketball – good views from all four sides with comfortable seats. The game I was at was the second leg of the BBL Trophy Semi Final, however the drama had been pretty much killed by the Eagles 32-point win in the first leg five days previously.

I have to admit I was surprised that there weren’t more people in the building, but people I spoke to assured me it was fairly normal for the Eagles this season.

On court the Newcastle Eagles, under Fab Flournoy, were head and shoulders above the Sharks. Joe Chapman was a standout, figuratively shooting the lights out from three-point range. Often referred to as “downtown”, Chapman’s triples weren’t just downtown, they were in the next zipcode!

Seven-for-eleven from beyond the arc on the night, en route to a game-high 31 points had Chapman the MVP by some distance.

The second period reminded me of what Flournoy’s basketball is all about – stifling defence followed by lethal fast-breaking offence – Sharks had no answer and Eagles were totally dominant.

I tweeted after the game how great basketball can be as a spectacle, but where one side is so much better than the other it can detract from it. That’s how I felt at full time, with the Eagles winning by 20 on the night, 52 on aggregate.

The game was as I’d remembered – the mix of speed, power, finesse and intensity – and I thoroughly enjoyed it. I would like to see the Eagles really challenged by a team who may be more equal than the Sharks last Friday night.

I arrived at the game feeling like a newbie all over again, but I left Sport Central as a reaffirmed basketball fan.

Final word on the press ruckus, seemingly started from our friends in South Yorkshire, around the “benefits” the Eagles get from having their MD Paul Blake as BBL Chairman.