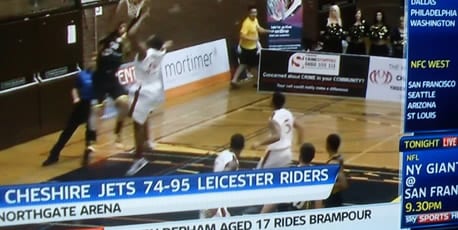 A new regular feature on BBL Fans is our BBL Shorts Blog, which will give you a quick run down of a few extra things that go on in and around the BBL and a little bit from the hear’say and gossip mill!

How great was it to see highlights from Cheshire Jets and Leicester Riders on SKY Sports News on Sunday evening?

Coming off the back of a story about the NBA lockout and Lebron James taking time out with children in London, a selection of clips from the BBL quarter-final was shown as part of the sports bulletin.

It was great to see the BBL get such coverage on the mainstream sports news channel – and it would be great to see on a regular basis. If only.

“Live” BBL hits our TV screens for the first time this week, when Glasgow Rocks’ league clash with Sheffield Sharks is shown on SKY Sports 3 on Tuesday evening, with full coverage of the game that was played on Sunday.

In an improvement from last season, there are a handful of live games scheduled, the first of which comes on Tuesday 29th when MK Lions host Worcester Wolves.

So be sure to tune in this Tuesday, 8pm on SKY Sports 3, for Rocks v Sharks.

For full details of the TV games this season, visit our BBL on TV section.

Not for the first time this season, treble-winning Mersey Tigers fell away dramatically in the second half to suffer another heavy home loss, this time at the hands of an albeit in-form Worcester Wolves.

From what I’m told, their short roster is causing a bit of a headache in training, and the players are being stretched to the max, as they look to make up for no pre-season. Coach Tony Garbelotto is pushing his players as they continue to play catch up, but it seems that it’s catching up on them on match-day.

They weren’t helped too by an illness affecting our very own columnist David Aliu, which kept him out for a few days recently.

Following the much publicised incident between Plymouth mascot Foxy and Guildford’s Martin McLemore, which resulted in a fine for the Raiders and a penalty for McLemore, hear say has it that there was another “Heat-ed” incident in Guildford’s recent game at Newcastle.

Two players came together and one apparently had to be walked away from the incident by team-mates before the situation escalated. Here’s hoping the Heat hit the headlines for picking up wins some time soon instead.

Have you got anything worth mention in BBL Shorts? Drop us an email at news@bblfans.com