David Aliu is set to make his 100th BBL Championship appearance for Mersey Tigers against Worcester Wolves on Friday. 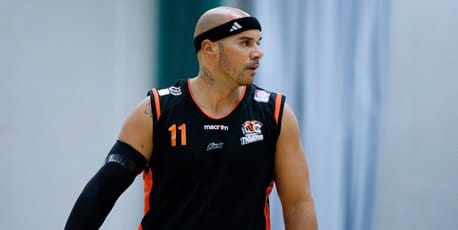 David Aliu is set to make his 100th BBL Championship appearance for Mersey Tigers against Worcester Wolves on Friday.

Aliu, 30, has been breaking club records galore this season, having recently racked up 1000 Championship points, and is eight field goals and five rebounds away from setting two more.

He has been struggling with a hip injury in recent weeks, but has still managed to average more than 35 minutes per game this season.

Aliu said: “It feels good to reach and achieve so many goals and personal achievements. What makes it even better for me on a personal level is doing it all in my home city for my home team.

“I’ve pretty much missed all practice sessions in the past two weeks, but was still able to play against Milton Keynes and Plymouth last week.

“That was mainly down to our great sports therapist Nick McCarthy. If it wasn’t for that guy, I could not have possibly played those games. I’m feeling much better now and have got back in to practice this week.”

There hasn’t been much to shout about at the Knowsley Leisure and Culture Park this season, with the Tigers picking up just two league wins this season.

Aliu added: “The regular season game that stands out this season so far is definitely the home game against Cheshire Jets where we came from behind to win in overtime. It was a tough but exciting game to be a part of.”