In his latest column, David Aliu speaks of the recognition he received for achievements at Mersey on Friday and gives his thoughts on Guildford’s recent turn in form and Sunday’s BBL Cup Final. 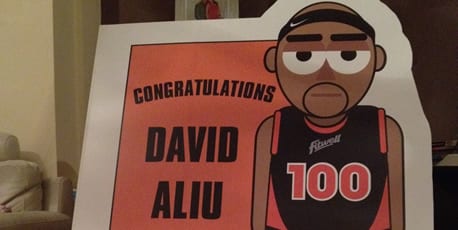 Last Friday night was a special one for me as I chalked up my 100th league appearance for the Tigers, and was presented with a fantastic little momento of the occasions. It’s the coolest thing I’ve ever received! I’ve got my own South Park character now!

It’s nice to get recognised for personal achievements, but I’d give anything to string together a few consecutive wins.

The game itself against Worcester was tough. They’re a very talented team and it was always going to be a tough game but I personally take responsibility for that poor performance. My contribution in that game was bad and I didn’t do a good job leading my team, and I think that’s why we started so flat.

We add Morakinyo Williams to our roster in time for the Worcester game. He is a new face to the team and he will give us some much needed size and a legit 5 which we have needed for a while. I’m excited about playing alongside him once he’s accustomed to our style of play.

While we were getting beat by Worcester on Friday, Guildford were picking up another win, this time away at Sheffield. I’m not surprised by their upsurge in form. I’ve said all season that they are a talented team and they have a good coach – it will just take time. And they have come up strong in the second half of the season so far.

But that said, I definitely believe that we can do the same thing by putting together a string of wins. We have the best coach in the league and the preparation we get is superb. We as a team just have to start delivering and I believe we can.

It was of course Cup Final weekend just gone. I thought it would be a closer game than it was because both teams are very talented but I’ve said it for years that Newcastle are led by a great coach and winner and they would always be tough to beat.

Charles Smith was unreal and his knowledge and experience of the league shone through in a big way in this game. I’ve been a big fan of his for a very long time, the guy is a winner and it showed. I’ve got friends on both teams so was gutted for Plymouth’s loss, but it was a good game and congratulations to the Eagles.

I’ve just launched my own website, www.davidaliu.com, where I hope to be able to keep track of things that happen in my career, as well as give details of my off-court projects. Check it out!