A game of four halves

In a new blog on BBL Fans, The Tip-Off looks at the BBL Cup semi-final format and whether games should be allowed to end in a draw. 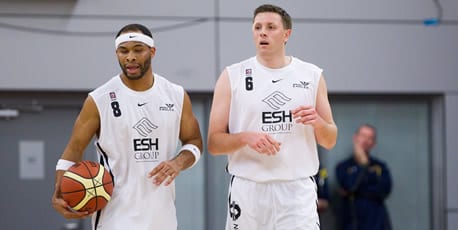 When the Leicester Riders and Newcastle Eagles trouped off the court after last Friday’s BBL Cup semi-final first leg it’s hard to know what was going through the players’ minds.

For the Riders – coming back from a twenty-one point deficit – there must have been a sense of relief that they had forced themselves back into the tie with an outstanding second half display and pride that they can play so good when the chips are down. For the Eagles there must have been a sense of disappointment that they let such a big lead go after a great first half performance, but also satisfaction that they put themselves in a great position for the second leg of the tie.

For both sets of players and fans, however, I suspect that there was an over-riding sense of futility and anti-climax. All the passion, all the drama, all the excitement… knowing that it had made little or no difference, and never would have. Knowing that each team still had a chance in the next leg, and regardless of what happened it was only to increase or decrease that chance by marginal amounts.

There’s been a lot of criticism in the past about the BBL allowing games to end in a draw. Those who level these criticisms have very valid points, I’m sure, but they are missing the bigger picture: it’s not the game ending in a draw that’s the problem, it’s the principle of a two-legged tie in basketball being allowed to happen in the first place. In the context of a tie being decided over two legs a game ending in a draw is a perfectly valid, if anti-climatic, final score. But then the truth is that a narrow victory in the first leg doesn’t count for much either, so what’s the difference? Would it have been any different if a team had eked out a one or two or even five point victory? In truth, probably not.

I don’t know anyone – players or fans – who likes them or think they are a fair way to decide ties. They punish the home fans in the first leg, sending them home after an inconclusive result that still leaves their team’s progression uncertain, and gives the team playing at home in the second leg an advantage by having home support while knowing the exact target of what needs to be achieved.

The reason BBL teams choose to decide ties this way basically comes down to money. The margins on which BBL teams operate are so thin that an extra home game is a real boost for them, and provides a tangible reward for progressing in competitions. I’m sure also that by just having one game to decide ties would prove a financial strain for the team having to travel, especially if they’re geographically distant from their opponents. The ideal scenario of a best of three series is also probably not viable due to venues – with teams not having guaranteed venue hire, only having home games on certain days or having to pay to reserve their venue without a guarantee of using it providing unnecessary, and often expensive, complications. Couple that with the last-minute marketing that would be required should a tie go to a decider and who knows what kind of attendance would show up, not to mention potential fixture complications in other BBL competitions.

In truth, as much as I loathe the two-legged tie situation there really isn’t an obvious solution that’s fair and benefits everyone. Having one game and splitting the gate receipts 50/50? Both teams miss out on vital cash flow and someone gets a home advantage. Playing a best of two series with a free-throw shoot out at the end if the games are split? It’s not any more ludicrous than penalty shootouts to decide football’s biggest competitions, but I couldn’t even type that without laughing. Playing one game in a neutral venue? Both teams have the cost of travel and both miss out on vital cash flow.

There really is no easy solution, so until something drastic happens we’ll have to make do with showing up to pointless first leg ties and going home after without a clue if our team will progress, regardless of whether they just won, lost or drew.